Publications are the medium to reach out to larger audience on various social issues affecting the lives of the people. We presently have three publications Kaleidoscope, Voices and Ashar Golpo. Of these three, Ashar Golpo is a booklet in Bengali being used as grassroots awareness tool while the rest two i.e. ‘Kaleidoscope’ & ‘Voices’ are bilingual books depicting voices of today’s youth. 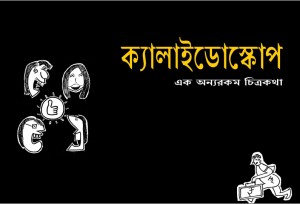 Kaleidoscope is a collection of six comics with different flavours. A bunch of youths have expressed their views using comics. May be this book will open a new window for you to see the world in different perspective.

While going through the pages of Kaleidoscope, you may recall that play ground, where today stands a huge skyscraper. The other page may take you to a village, where the birds are protesting against child marriage. A ray of smile may come to your face, the next moment you may start thinking “ eh, no! it should be stopped !”. My friend, that very thought will be your addition to the Kaleidoscope. In Kaleidoscope, you will find a young girl is stuck in the conflict between religion and love, while another of her age is exploring Gandhigiri to change the society. 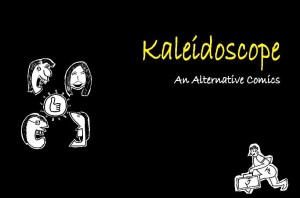 Kaleidoscope is a amazing collage with the shades of emotions ! It’s not a fabricated story, in Kaleidoscope the youths have shared their experiences and perspectives towards life.

The interesting fact is that, none of these youngsters are so called ‘artists’. Some of them have drawn for the first time. If these pieces of black and white comics stimulate some thoughts within you, then we will feel that the efforts have been fruitful.

Voice in pen and sketches: 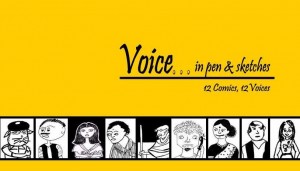 “Today’s youths are busy in studies, friends or internet world; where they have time to see the world outside their circle? ”Voice…In pen & sketches” is here to laugh away on statements like these. “Voice” is actually the voice of today’s youth, which is mostly ignored in the society. Armed with 12 comics, each comics expresses the feelings of a youth. Interestingly, none of them are “so-called” artist, in most of the cases it’s there first try.  During the last 1 ½ years, youths from different places, different sections of society, participated in “Comics Adda” workshop. The objective of these workshops was to promote youth voices through comics.

This collection is of some comics made during these workshops. Actually, 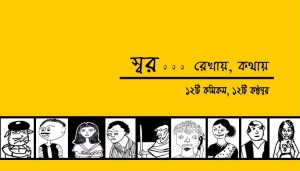 through this book we want to exhibit their voices, comics is mere a medium. So, without analyzing how successful they become as a writer or comic artist, just enjoy reading the book, think about the issues raised.

Be it, the story of life of her friend getting married at 13, or a fear that society will make me just a money earning machine, or an effort of few youths to make their area better, each story makes us face the reality or surprises us or attempts to bring a new ray of hope. If these 12 different perspectives depicted through comics, stimulates some thought in you, then we will consider our efforts successful.

A need of a communication material which can help the peer group  to talk about the issue of child marriage of the  school going girls was continuously arising from the Udaan core group members.  The purpose of this tool was to spread the message of child marriage.  “Ashar Golpo” (story of Asha), a booklet on child marriage was published as a communication material. This is a story about a girl who got married at the age of 13 and how her life changed after that. The story is written in a very simple, but filmy style along with some illustration (as suggested by Udaan core group) which is liked by the adolescent girls of the area.